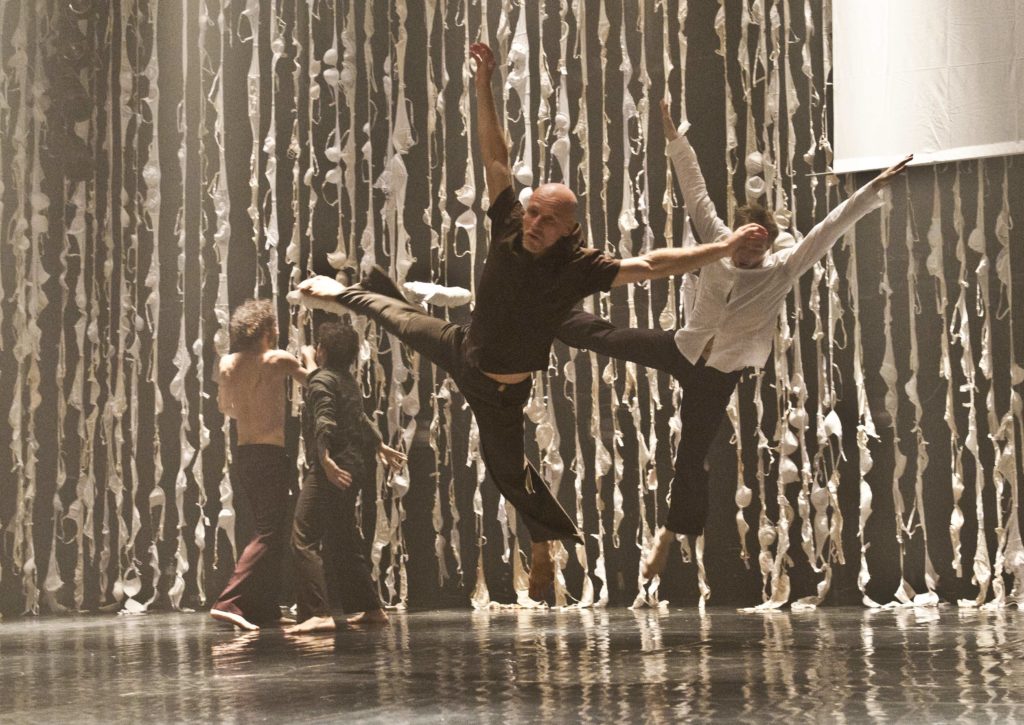 Adopting an iconographic apparatus, extremely contemporary, the performance tackles, with a universal language, current issues such as violence against women, and religious and economic fundamentalism. A.semu tutti devoti tutti? is dedicated to the patron Saint of Catania – deprived of her breasts as a punishment for her refusal to get married with the city Proconsul – and to the huge feast and procession in her honour.

Sicily is depicted in between fascination, mysticism and harsh reality. The pure and visceral dance of Roberto Zappalà portraits the ambivalence of the procession of Saint Agatha, between sacred and profane, spirituality and illegality. The video of Carmen Consoli’s soft guitar plays and twists the chants of the nuns of St. Clare. Live music played by Lautari, an evocative backdrop consisting of 1600 bras stitched and hanged, and seven men carrying the body of the Saint in triumph, are the background to the paradoxical message contained in the title A. Semu tutti devoti tutti?: a lay reflection upon fundamentalisms that obscure society and faith. A pop show, “physical and macho in the language, full with stamina, willingly wild, obsessive, and a very energetic dance” (Anna Bandettini) but also lyrical, philosophical, and socially committed.

For the past 28 years Roberto Zappalà has been recounting a lively and vibrant South «with tenacity, clarity, vision and continuous desire to move forward, perfecting his poetics, and giving a home to his naturally humanistic and philosophical ideas of dance» (delteatro.it).
Characteristics of his creations include a personal narration of his land, Sicily, a rigorous work on his choreographic language he calls MoDem, and his research on the vulnerability of bodies, all characterized by intense poetics and deep dialogue with “the human”.
In 1990, he founded Compagnia Zappalà Danza, for which he has conceived over 80 creations. He has also collaborated with other companies including Balletto di Toscana, La Scala Theatre Ballet School in Milan, Norrdans, ArtEZ Arnhem, Goteborg Ballet, Theater am Gaertnerplatz of Munich, and others. In 2011, he score choreographies for the Opening Ceremony of the World Fencing Championship, and in 2016 he directed the Parata Urbana Project for the Torinodanza festival and the Défilé at the Lyons Biennial. He has worked with many opera directors, such as Daniele Abbado, Federico Tiezzi, and Giorgio Barberio Corsetti, and various international artists, including Giovanni Sollima, Paolo Fresu, Fabio Vacchi, Alfio Antico, Vincenzo Pirrotta, and Gianluigi Trovesi. His essays on the methodology of his work have been recently collected and published in a single volume entitled Omnia Corpora
Roberto Zappalà has also been in charge of planning and restoring Catania’s Scenario Pubblico, a rare example of a European choreographic center in Italy.
In November 2013, he received the Italian Association of Theatre Critics Award.

Scenario Pubblico/Compagnia Zappalà Danza is one of the four Italian Centres of Dance Production recognized by the Italian Ministry in 2015. It is located in Catania on the island of Sicily, and is the only one in central-southern Italy.
The Centre produces the permanent “Compagnia Zappalà Danza” dance company founded in 1990 by choreographer Roberto Zappalà that has been supported by the Italian Ministry of Culture and the Region of Sicily since 1996. Compagnia Zappalà Danza is considered one of the most prestigious companies on the Italian dance scene and has received various awards for its repertoire in more than 60 creations. It has performed at international festivals and theatres all over the world thanks to the synergy between choreographer Roberto Zappalà, his playwright Nello Calabrò, and of course, his dancers.
Thanks to the determination of its artistic director Roberto Zappalà and private and EU funding, the company opened Scenario Pubblico in 2002, a venue with a black box theatre, dance studios, offices, and a café in the heart of the city of Catania that immediately provided the urban setting for the expression of the languages of the body. All kinds of activities take place at Scenario Pubblico: production, hospitality, residencies, workshops, meetings, publishing and much more, making it a place where dancing can express all its potential.
The Centre also focuses in supporting emerging choreographers with the Acasa articulated residency program focused on single projects and the associated choreographers who collaborate for a three-year period.
Beside Compagnia Zappalà Danza, the Centre also produces ‘CZD2/giovane compagnia zappalà danza’ that serves as a Junior Company with dancers selected from all over the world. Every year different artists are invited to create original choreographies for this young group of dancers.
Many Italian and International dance companies are hosted at Scenario Pubblico during a rich dance season running from September to April with around 120 performances annually. In recent years, the Centre has begun organizing the FIC Festival in May: a one-week festival that presents emerging contemporary dance.
Scenario Pubblico/Compagnia Zappalà Danza is part of the European Network DQD-Danse Qui Danse.