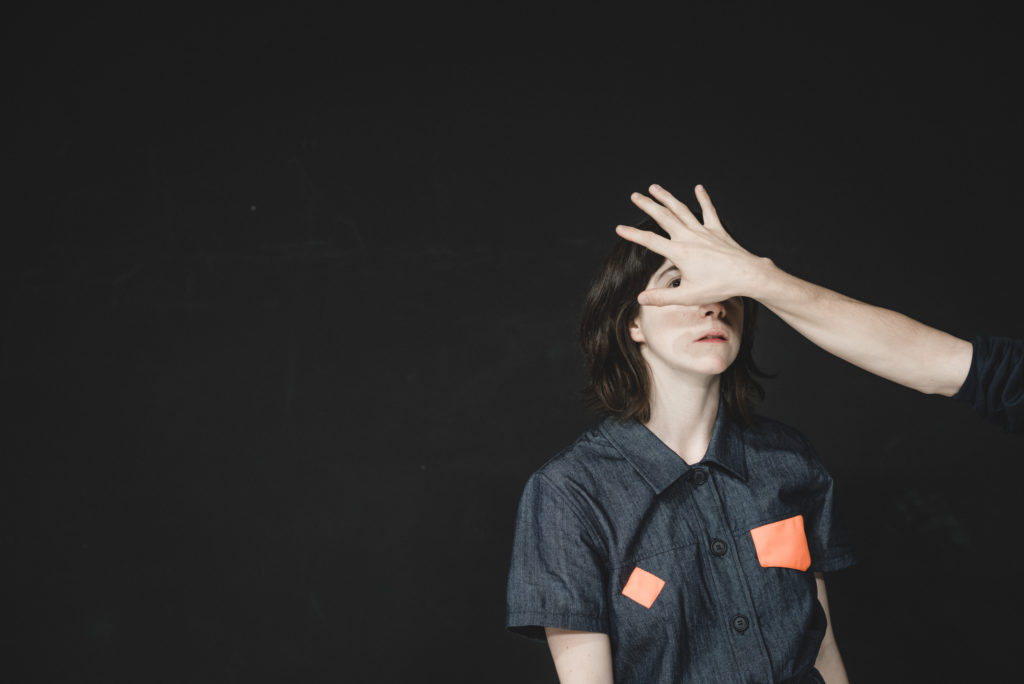 According to french philosopher Derrida, “archive fever” (mal d’archive) is the destructive force in all conservation and cataloguing projects. The man who archives commits violence against what mustn’t be remembered. In archive time, the future, in order to ensure that something will survive, something else must be killed. In Avalanche, the eye of a Cyclops is observing the two protagonist human beings as ancient dust preserved in a block of ice. They are Atlases, walking at the dawn of a new planet after shouldering the burden of their millennial melancholy. What has not been allowed to survive now acts like an invisible force over what was allowed to remain and is now being recalled as a rule, a collection, a list of possibilities. The dance lives in a constant tension towards the infinity of enumeration, desperately looking for an outcome.

With the eyes half closed, as if to protect their gaze from the blinding light of some never-seen color, they grab the blaze of one last possibility: a land of sand and seeds on which someone else will learn again how to move, after the last archive has been destroyed.

Marco D’Agostin is an artist working in the fields of dance and performance. He has performed for Claudia Castellucci/Socìetas Raffaello Sanzio, Alessandro Sciarroni, Liz Santoro, and Sotterraneo, among others.
He has been developing his own practice as a choreographer since 2010 and invited to international dance research projects such as ChoreoRoam Europe, Act Your Age, and Triptych. He has presented his work at the main European and Italian Festivals (Rencontres Chorégraphiques and Théatre de La Ville in Paris, Les Brigitines in Bruxelles, The Place Theatre in London, Santarcangelo Festival, Romaeuropa Festival, and Torinodanza).
He won the 2010 Gd’A Veneto Prize, the 2012 Prospettiva Danza, the Teatro Libero di Palermo Prize at the BEFestival and 2nd Prize at the (Re)connaissance contest in Grénoble in 2017 (for "Everything is Ok"). He has been named twice among the Priority Companies of Aerowaves and received the UBU Award (the most prestigious prize for theatre in Italy) as Best Performer under 35 in 2018.

VAN is a dance company regularly funded by the Italian Minister of Culture and the Emilia Romagna Region. It supports, produces and distributes works and projects by its three co-founders, Marco D’Agostin, Francesca Foscarini, and Giorgia Ohanesian Nardin as well as works by Andrea Costanzo Martini, Camilla Monga, Irene Russolillo, Enrico Ticconi and Ginevra Panzetti, and Davide Valrosso. All VAN artists are members of the same generation and share the same urge to renovate language, crossbreed creative processes, and add a dimension of internationality to their careers.
A name that insinuates a nomadic approach, VAN was created in 2013 with the objective of creating a structure that protects individuals on their paths by offering concrete support in research, production and education. Today, VAN embraces a vocation for horizontality and attempts to define strategies and shared work ethics within which eight choreographers decided to unite forces, thoughts and methodologies at the end of the second decade of 2000.
To this end, VAN promotes activities that run parallel to individual creative processes and reach out to Italy’s entire dance system: think tank, physical practice archiving projects, and manifestos of ethical sustainability.