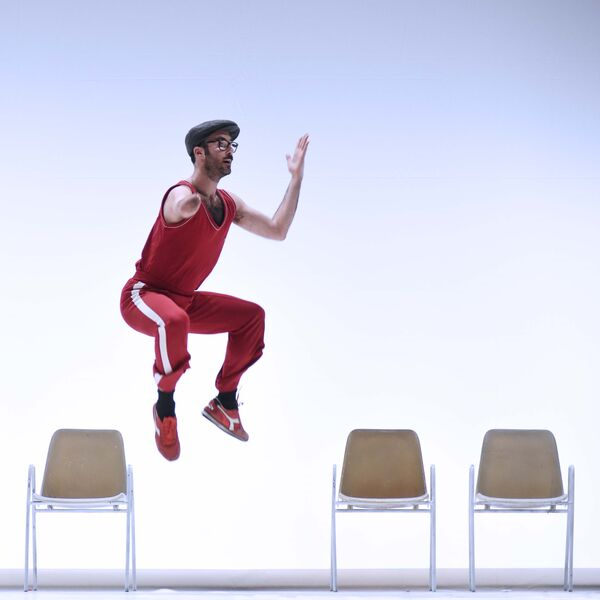 Bad Lambs is a physical score for an expanded group of performers combining the permanent Balletto Civile team with disabled dancers to trigger new processes and experiences. It mixes different bodies together to find a collective balance as the common denominator of a journey through present times. What is a ghost? It is something that persists in the dimension that influences our actions. The “bad lambs” have lost the best part of themselves in a car crash. Although not everyone realizes it, no one is able to say goodbye to their own ghost no matter how hard they keep trying: knocking themselves around, losing balance, pushing and pulling each other, smashing porcelain, running desperately in search of a place to call home, be it a closet, a neomelodic song, a poem, or the past. Bad Lambs is no beautiful fairy-tale that softens the sad truth. It examines the grace by which a person accepts transformation or loss. It feeds on a dignity that does not lie in great form, but in the efforts made to create one. Willpower defines the difference between what has already been and what is no longer, it selects what of the past can be useful to the present and if it does not find anything, it invents: self-preservation. There is no godsend; human forms all have the same dignity but no one is saved. There is no better or worse. Heaven and hell are two ways, with the same structure, to call eternity, in the same way, as are both history and a tale of fiction. Bad Lambs explores what we can do when we have lost everything else. It tells about the war humanity must fight till death becomes tragedy, noise turns into music, movement into dance, words into poetry, and life becomes adventure.

Michela Lucenti discovered the work of Pina Bausch through her main dancers Beatrice Libonati and Jan Minarik. Attending the Teatro Stabile Drama Academy in Genova, she encountered the final stage of Jerzy Grotowski’s research working directly with Thomas Richards. In 2003, she founded the Balletto Civile Company. Her work has been supported and co- produced over the years by CSS, Udine, Teatro Due, Parma, Teatro della Tosse, Genova where she is currently an artist-in residence, and by NeukollnerOper, Berlin. Her work with Balletto Civile brought her several Awards, including the ANCT (Critics National Choice Award in 2010 and 2012, the 2010 CREOLE PRIZE, the 2011 2010 Dance Award, the 2012 Mydream Award, the 2016 Hystrio Award for her “Corpo a Corpo” project, and the 2017 Danza&Danza Award as Best Production of the Year for Bad Lambs.

Balletto Civile is a nomadic art project driven by a strong sense of ethics characterized by its search for a complete performing language that places priority on the interplay of theatre and dance, original live singing, and deep relationships between performers. Balletto Civile works draw from various sources of inspiration, ranging from the retelling of great classics of Theater, Dance, and Music to original drama by Italian playwrights and the staging of works by the leading foreign writers. The company has received various awards over the years. Its pieces have been played in many national and international theatres and festivals including the Venice Biennial, the Santarcangelo Festival, at Teatro Eliseo in Rome, the OrienteOccidente Festival, at Teatro Comunale in Ferrara, Teatro Comunale in Vicenza, and Teatro Stabile in Torino, the Cairo Opera House, the Volterra Festival, at Teatro Comunale, Bolzano, the Ravello Festival, the Spoleto Festival, the Teatro dell'Elfo, the Neukollener Opera, and the Anhaltischen Theater Dessau, etc.