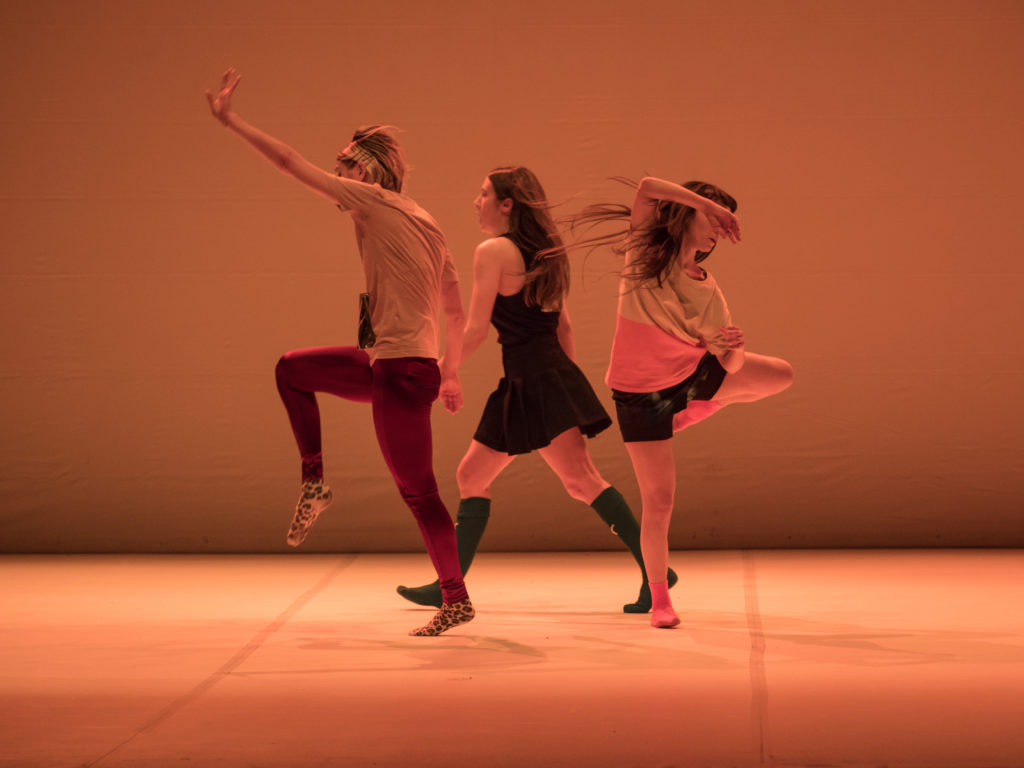 Bermudas is a choreographic system for a variable and interchangeable number of performers (from five to thirteen). It supports the idea of a perpetual motion ruled by an organic order, aiming at the creation of a dynamic continuum in space and time, while making visible the workings of each performer to feed and alter the general structure. This research is inspired by chaos theory and the generation of complexity starting from simple conditions, as in the evolutionary systems of physics and meteorology, but is primarily a way to bring out a detailed perspective on the  body posture in dance and, as such, it is above all a choreographic research on relationships. The system of movement speaks of closeness and cohabitation between bodies who share the same space but have slightly different possibilities to relate to one another. The continuous search for an agreement produces relational tension and shifts the focus on the ‘outside’ of the body. The energy field is out in the surroundings and is a turbulent one (as the title of the piece ironically suggests). Each performer has a good margin for calculating and determining which action best suits the development of the system; this means that dance is treated as a tool for real-time knowledge of what is next to us, and italso means that the effort towards adaptation becomes the primary means of communication.

We should expect the hypnosis and the climax generated by the rhythmical definition of a habitat to build an interesting field of choreographic possibilities. The piece is adaptable to different spaces: it can be staged or unstaged for environments inhabited by the audience at very close range.

Michele Di Stefano, founder of the group Mk group, was awarded the Silver Lion for innovation at the 2014 Venice Dance Biennial and the 2018 Nico Garrone Prize. His creation Bermudas received the 2018 Danza&Danza Award for Best Italian production. He created Upper East Side for Aterballetto and Line Rangers for the Korean National Contemporary Dance Company (Autumn 2014). He is the artistic director of the contemporary dance program for Teatro di Roma (2018-2020) and the creator of BUFFALO, a performance program at Palazzo delle Esposizioni in Rome (2019). In 2018, he was the guest curator for the “Outdoor” program of the Bolzano Danza Festival and was invited to the International Artists Summit-PACT Zollverein in Essen. He is also the curator of the GIACIMENTA section for Matera European Capital of Culture 2019. Together with Margherita Morgantin, he recently published “Agenti autonomi e sistemi multiagente”, a book of choreographic instructions and weather reports (Quodlibet 2012).

Mk is one of the liveliest contemporary dance research ensembles on the Italian scene whose performances have been hosted by festivals, venues, and museums in Indonesia, USA, Japan, Peru, Germany, France, Hungary, Spain, Portugal, and elsewhere. Among its latest productions, “Robinson” premiered at Teatro Argentina in Rome in 2014 and is still on tour.
Veduta (2016) is an immersive performance dedicated to the city and the perspective view of the urban landscape. Bermudas (2017-18) is a choreographic system for a variable and interchangeable number of performers who support the idea of perpetual motion ruled by an organic order, the winner of the 2018 Danza&Danza Award for Best Italian production).
The new creation, Parete Nord, dedicated to the mountains, is an international project coproduced by Torinodanza 2018.
Mk re-staged its first choreographic duet (e-ink) in 2015 for the RIC.CI (Reconstruction Italian Contemporary Choreography) Project with two Aterballetto performers.
The group has been invited for three years in a row to the Venice Biennial College, holds workshop projects in many different activities, and formats at the Paolo Grassi School in Milan. The Italian Ministry of Culture has supported MK since 2010.