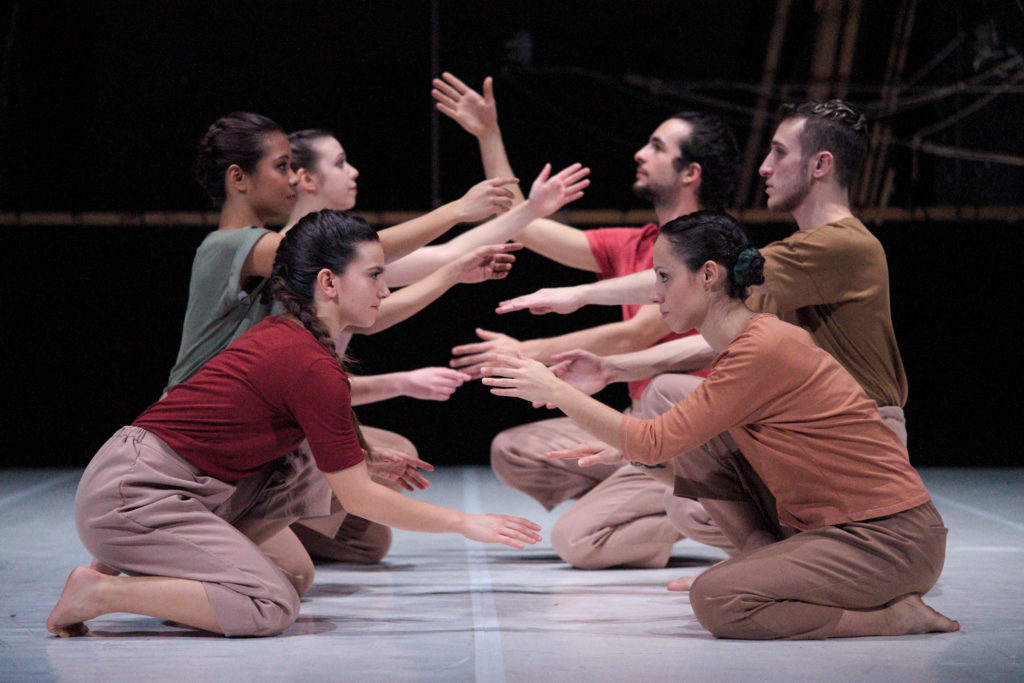 The poet and philosopher Lucretius described the Nature of Things with a surprising attention for the explanation of phenomena. His Latin poem discloses the reality of the cosmos and humanity with precursory contents of the modern science. De rerum natura is a work devoted to atomic fusion and fission, the vastness of space, the development of time, the intellect, and the human soul from birth to decline. The work puts a vibrant and vivid glaze on natural things in order to describe the infinite mutation of the world and its cyclical regeneration. This orbital revolution stokes the desire for the movement of six bodies connected by hidden, hot-blooded thought. An anatomical drawing flows from the articulation of the gesture and spreads to the smallest parts of the body, penetrating the epithelium into the bones. Bodies are connected in a scenic composition in which the construction, distribution of the elements, and the relation between correlation and interdependence create an organic and breathable totality.

Nicola Galli conducts bodily research and offers his results in artistic pieces and devices that range from choreography to performance, body installations to graphics. In 2010, he started a choreographic research focused on the shape and definition of the “stratification” and “landscape” concepts in connection with the body. Starting from geometry and astronomy, his fascination extends to anatomy, proportion, and detail, the elements that compose his transversal scenic imaginary world. He danced and performed with CollettivO CineticO Company from 2010 to 2014. Since 2014, his work as choreographer has been supported by TIR Danza. His works have been selected for Italian and international festivals, such as Vetrina della Giovane Danza d'Autore in 2012 and 2015 (Network Anticorpi XL), International D-Caf Festival and Düsseldorf Tanzmesse 2016. In 2018, he won the Danza&Danza Prize as best emerging choreographer with his piece "De rerum natura" and the Equilibrio Prize with "Deserto digitale".

TIR Danza is a production organization operating in the field of contemporary and experimental dance. Its main activity is supporting choreographers and helping them promote the value of their identity and creations with particular interest in investing in the experimental groups that mature within the most advanced forms of choreographic research. TIR Danza unfolds its creativity by combining the different expertise and professional experiences of artistic directors Fabio Acca, Massimo Carosi, and Pietro Mazzotta.
One of the most remarkable features of TIR Danza is its commitment to developing a curatorial approach that qualifies as constant analysis of the relationship between subjects and artistic languages, audiences and production structures, an approach characterized by a cultural research that aims at consolidating the “new Italian dance system” with its most dynamic and original artistic expressions.
In 1991, it was recognized for its dance production activities by the Italian Ministry of Culture’s Live Performance Directorate General, and in 1996, for its role in the field of performing arts and cultural promotion by the Emilia-Romagna Region and the Municipality of Modena.
TIR Danza is now supporting Barbara Berti, Riccardo Buscarini, Nicola Galli, Giuseppe Vincent Giampino, Igor and Moreno, Manfredi Perego and the Factory Company.