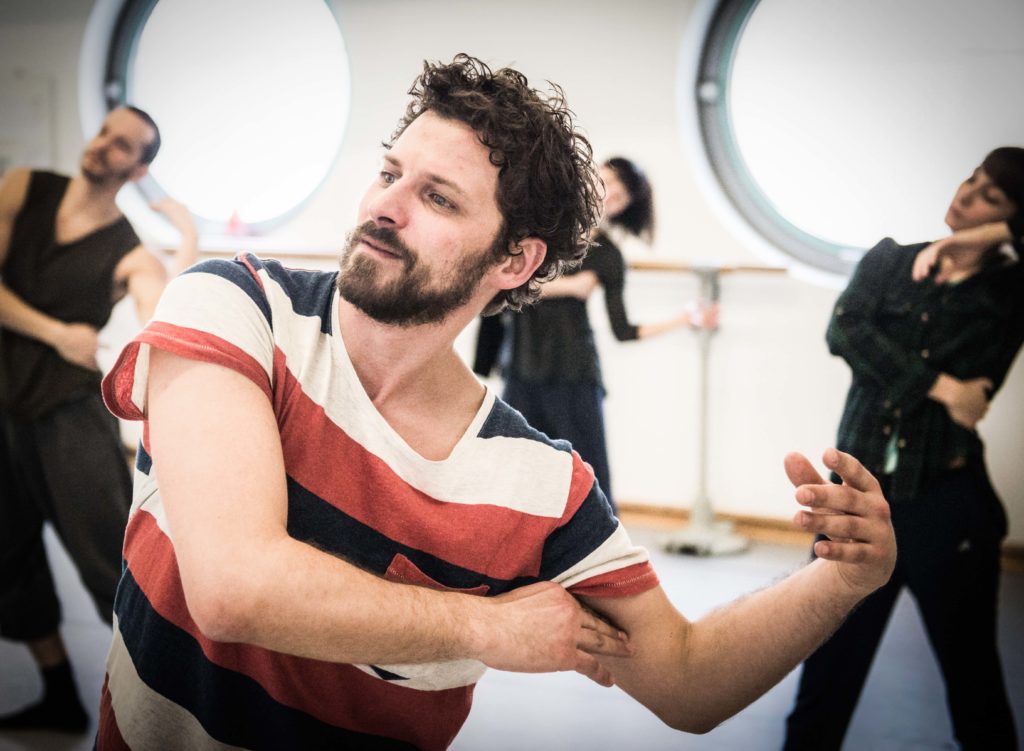 The Elegy (or Lost Things) choreographic project is inspired by a corollary of primarily existentialist and introspective reading we reached at the end of a productive cycle featuring Alcesti (a work of the most humanist of the tragic Greek playwrights) and Don Quixote (the self-examination of a misunderstood hero). Other literary works that provided inspiration include the Trilogia degli Antenati by Italo Calvino, Nausea by Jean-Paul Sartre and Raul Brandao’s I Poveri. The landscape evoked by these literary references, balanced between the crude, the raw, the dreamy, the illusory takes the form of nostalgia and memory as the material that fuses the trace of our roots and identity, but at the same time, the separation from them and he sentiment of moral Exile that ensues: a dream of impossible returns, rage against Time that cancels everything, the farewell to what is now being lost and what has drawn the map of our interior journey. In investigating the land of Exile, our desire is to go beyond mere geographic meaning and explore the moral condition of anyone who happens to feel alien to the world in which we live, inhabiting a space suspended between past and future, hope and nostalgia. The desire that nostalgia brings in itself is not as much the desire for an immobile eternity as an always new genesis and a place that remains, a place where nostalgia thrives on a rebirth that is living material and helps us resist and endure, change, a place you can go without ever getting there, continuously, infinitely, the land of filibuster where all things lost end up.

Born between February and April 2019 in Torino, during the summer of the same year, the project grows up thanks to two residences in Progetto Centro di Residenza Direzioni Altre (Tuscania) and Interconnessioni (Cagliari), and then it comes back to Torino in order to define the final setting. It will develop also with a technical residence in La Nave del Duende (Spain) and, after that, it will be ready for the debut.

Stefano Mazzotta, choreographer graduated at the School of Dramatic Art Paolo Grassi in 2000. He has worked with directors and choreographers including Ismael Ivo, Luca Veggetti, Monica Casadei and Avi Kaiser. Since 2005, he is choreographer and artistic director of the dancetheatre company Zerogrammi, with which he starts an authorial path result of the contamination between dance and physical theater. From this mixture derives a fluid and evocative choreographic sign broken only by forms coming from the rich vocabulary of everyday gestures, whose first instance is a communicative lightness of Calvinian inspiration. He has directed productions in collaboration with festivals and theaters in Italy, Portugal, France, Russia, Singapore, Holland, Germany and received awards such as the prestigious Russian Golden Mask in 2012, Giocateatro 2009, Danz'è 2008, Premio Hystrio 2013. He is currently director artistic director of CASA LUFT, venue of the company and space for choreographic coworking.

The dance of Zerogrammi is made of small daily gestures, of fine, minimal, invisible, imperfect details revealing, despite their inconsistency, the deepest aspects of the human being. The construction of movement is the result of observation, repetition and distortion, till the threshold of grotesque, of the most fragile, contradictory and absurd human characters: a tic, a wince, an hesitation, a distraction are the starting point of an essential and clear narration that subverts the meanings, creates unusual points of view and suggests to the audience new logic of thinking.
The organic journey of discovery, leading to creation, comes to compositional work through the experience of languages and places often transversal to the artistic field, to give to the creative work new signs, new meanings and an experience-based baggage representing the essential tool with which Zerogrammi comes back to the construction of its artistic work, renewing its sense and urgency.
Physical action and dance become a connection between the body itself (its form) and the body of the world, object of welcome and shared responsibility between narrator and observer. They are language, consciousness, perception, thought. They are an offered gesture, poor and peripheral, able to rename things.