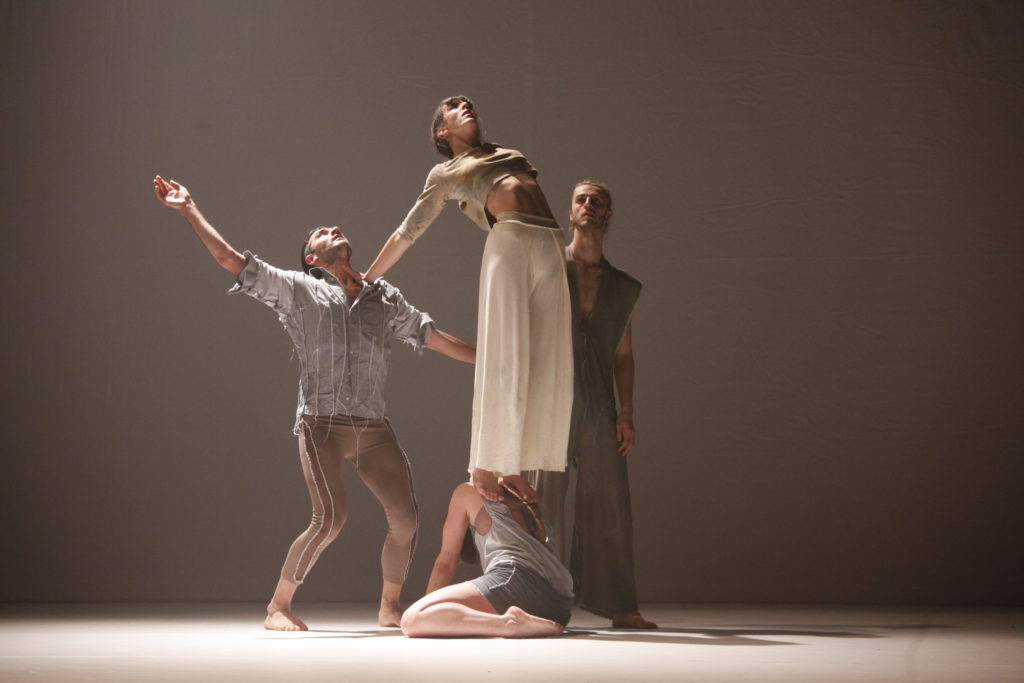 “The real happiness represents the great dilemma of everyone, or at least of the wisest ones.” Pierre Zaoui

“Joie de vivre” is a thought in choreographic form addressed to the vegetal universe and willing to investigate specific behaviour in the relationship between body and space.

In “Joie de vivre”, the preponderance of an emerging behaviour is the symptom of an energetic purpose, an organic and perceptual impulse, a practice developed between the human being and the entire world. This kind of behaviour is a phenomenon, which initiates continual irradiations, among belongings and depth, placing the body in an arrangement of admissions and distances in relation to knowledge: of itself, of other people, of the territory, of our habitat and environment.

“Joie de vivre” indicates the biological dimension of existence, the limitless interrogation of standing among events, in time and a place. Everything happens while looking to the vegetal universe, trying to catch the flowering and rhizomatic attitudes of changes in state, absorbed in a logic made by silent and invisible transformations, tactical skills, territorial projects, border mobilities, meetings and settings of liquid communities.

“Joie de vivre” relates natural inclination, emerging behaviours, polyphonic relations between events and elements. In those border territories, docking is uncertain, and singularities burst into the dynamic landscape continuum to maintain the elementary urgency of their existences.

“Joie de vivre” prefers variations in scale where rhythmic variances rule the choreographic composition and the gestures of vegetal origin are sought in the bodies’ depth, in the infinite spatial possibilities of anatomy.

Simona Bertozzi has studied in Italy, France, Spain, Belgium and the UK, completing her university studies in Bologna (Dams). As a dancer, she has worked with Tòmas Aragay (Spain) and Virgilio Sieni. In 2005, she set out on her own choreographic research path, and in 2008 founded the Simona Bertozzi Nexus|Compagnia, with which we she has obtained many awards and reviews in Italy and abroad. The body language in her works is a product of different practices, thoughts and subjects in which the creative act becomes a many-sided system in constant dialogue with the contemporary. Since 2014, her creations have also been addressed children and adolescents. Along with her creative activities, she dedicates her attention to high-level training, collaborating with researchers and professors of Performing Arts. She conducts workshops at the Music and Performing Arts department of Bologna University and the National Dance Academy in Rome.

The Company has been promoting research and production projects concerning dance and performing arts since 2008. It has been supported by the Emilia Romagna Region since 2012 and the Ministry of Culture since 2015. Its dancers all come from different countries, artistic and choreographic backgrounds. The company has also been producing works for children, adolescents, and dancers with disabilities since 2014. Nexus collaborates with outstanding experts, such as Francesco Giomi (Tempo Reale Firenze), Enrico Pitozzi (Bologna University), and Stefano Tomassini (IUAV).
Some of the works in the repertoire include: “Homo Ludens” (2009-2012) created in Italy and in the UK, which contains the solo “Bird’s Eye View”, winner of the Audience Prize at the Masdanza International Festival in the Canary Islands; “Prometeo” (2015-2016), whose sixth episode “And it burns, burns, burns”, was a finalist at the 2017 UBU Prize for Best Dance Performance of the year; “Lotus” (2017) won the Migrarti prize; “Joie de Vivre” (2018) a work with an international cast, co-produced by ERT, Teatro Comunale of Modena and support from Fondazione Nazionale della Danza/Aterballetto. The Company’s repertoire has been well-received on the international circuit, such as at Aerowaves, Dance Week Festival, Les Brigittines, Tanec Praha, Correios em Movimento Rio de Janeiro, Intradance Mosca, Fringe Festival Edinburgh. The company is currently working on a new piece for the Venice Dance Biennial.