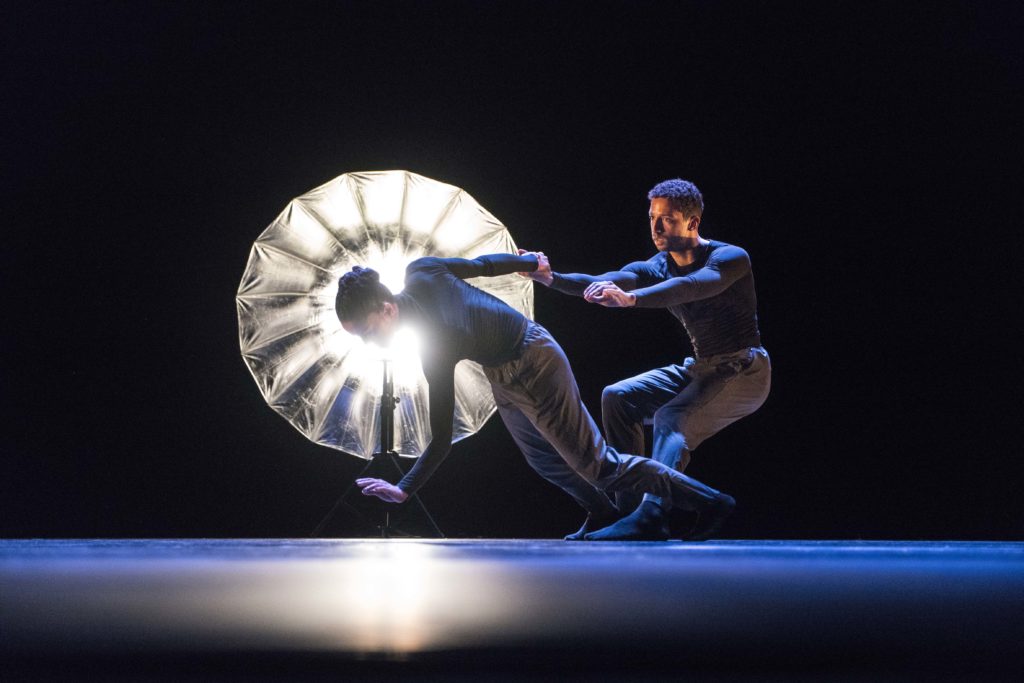 A stage can be presented as a sort of ideal map, in which the dancer searches for his or her own routes, stops waiting – as if in an unknown city – or throws himself or herself safely along lines that belong to him or her in the construction of his or her journey. Saul Daniele Ardillo started from maps of large cities, positioned on the ground, on which the five dancers of Aterballetto built the first version of the show, a site specific of great emotional strength staged at Palazzo da Mosto in Reggio Emilia in the fall of 2018, with the title Maps 1:610, allusion to the scale used. It was the beginning of the collaboration and complicity with Jorge R. Pombo, a Catalan painter who made available his large “maps”, taken from Google, of the city of his heart. The metaphorical force of this idea grew in the following months, and Ardillo has increasingly transformed the maps into a mental dimension with which we often find ourselves living. The feeling of getting lost, perhaps in the places or relationships that we know best, or the need to take refuge in a small area of comfort, escaping the real or supposed harshness of a trip. And now the maps have become a visual and pictorial reference, for a frontal and theatrical stage space, in which each of the dancers makes their own journey, sometimes lost in an apparent cage, sometimes launched again in search of the encounter. Every nuance is amplified, even in the repetition of gestures, which tells how often we find ourselves closed in places that we know very well but that still make us lose, and push us to repeat the same paths. Lost in is the development of an idea on which Saul Daniele Ardillo has worked for more than a year, a creation that emerges clearly from a boil of emotions, and that draws before our eyes perhaps the most extraordinary function of art: to help us to inhabit, even literally, our living spaces, offering them to a detached and profound vision, that lets emerge that beauty that seems lost. Like piano music, it makes its way between urban sounds and electronic interference.

The idea at the base of “O” is eternity and how attaining it is humanity’s ultimate goal. As in the summer of 2017 in Hong Kong for the very first time two humanoid robots vocally interacted with one another it became clear to anyone watching that a future, in which accumulated human knowledge is passed on by communicating inorganic material, is within reach. Therefore “O” can be seen as two human beings or two robots celebrating in a state of transcendence and emotional fulfilment, both moving to the never-ending beat of their unstoppable hearts.

And as the spaceship computer Hal in Stanley Kubrick’s movie ‘2001: A Space Odyssey’ puts it: “I know I’ve made some very poor decisions recently, but I can give you my complete assurance that my work will be back to normal. I’ve still got the greatest enthusiasm and confidence in the mission. And I want to help you.” First prize at 32° Hannover Choreographic Competition – June 2018. Philippe Kratz is ‘Member of stARTacademy of the Bayer Arts & Culture.

Staging a performance addressed to children today is an act of responsibility with a serious obligation: looking closely into a present-day reality none us really knows. If culture is to contribute to the Future, we must first penetrate Today. The child looking trustfully up at us deserves not only the most sincere reading of these times of ours, but also an honest emotion, a thrill, micro-infusions that go deep beneath the skin of the unceasing invasion and assault of daily life. The discovery that a team of educators, scientists, artists, and sociologists made is called Beauty. They found it growing between the cracks of cliché, clouded by fear, dissolved in violence. So they gave this theme and a few helpful hints to the artists ordered to construct a sturdy dance performance for children. These were the objectives behind the birth in spring, 2018 of Costruzione del futuro/Building the future, a research process launched by Fondazione Nazionale della Danza, Accademia Perduta|Romagna Teatri, and Reggio Children: three national points of reference in the production of dance and theater for children, the latter specialized in educational theory and practice. The process will end in the creation of the performance.

It’s a give and take thing. It goes beyond adapting the language of contemporary dance to some presumable choral dance of the future capable of dialogue with children and remodeling every child’s awareness of his or her body, helping each one appreciate and respect her or his special identity, uniqueness, diversity. Also the artists must open their eyes to see the world as children see it once they have been shown where to look, how to describe it and even re-invent it. The process is such that the performance originates with children before it begins moving towards them. In a nutshell, three groups of protagonist children (aged 4, 6, and 8) interact with stories told by the dramatist, Simone Giorgi, and the gestures of the choreography, Saul Daniele Ardillo (one of Aterballetto’s most promising talents). The children will clearly not be just viewers, but accomplices in the creative process.

Simone Giorgi and Saul Daniele Ardillo are aided in their tasks by the constant attention of a team of educators and a specialized musical consultant.

Four very young, very talented dancers selected with the involvement of some of Italy’s most prestigious training centers, the Agora Coaching Project run by Michele Merola and Enrico Morelli, and DanceHaus, directed by Susanna Beltrami, will be given the stage. At last, La stella nascosta will be performed right where the new generation of Italian dance is seeking a home of its own, questioning itself as a potential present day, inter-generational, cosmopolitan language: the New Italian Dance Platform. We believe the choice to be significant: Fondazione Nazionale della Danza will offer not one of its larger performances for sixteen dancers and choreographers from all over the world but a much small piece for four young dancers addressed to children instead. Hidden beauty, beauty that reveals itself through subtraction, beauty that scorns the rule of mass media: here, not on the world’s more evident misery for once, our entire attention will be focused.

Subtraction intended as the elimination of the “superfluous”, of everything that coats and protects intimate beauty. Stereotypes, expectations, conditioning by mass media, the fear of being unattractive, the need for acceptance. There are so many reasons why we try to protect ourselves, shielding our innermost essence from the world. But true beauty lies hidden in what we really are, in what sometimes seems like imperfection, in the mystery of what every human being is: without intimacy, we would never discover the real beauty each one of us harbors inside. Reconstruction as awareness of those hardened layers that obstruct the emergence of each individual’s uniqueness, therefore deconstruction and repetition are required in order to find through countless adaptations the right “key” to the door to one’s own intimate beauty and truth. Naturalness is not spontaneity, or rather, the one and only spontaneity, intimate adherence to our feelings. It’s not something that can be taken for granted, but rather a conquest demanding hard work, long time, patience, and perseverance. Try. Fail. Try again. Fail a better way.  “….The mirror, which shows not the truth but an image; beauty as desire, the desire for beauty. And more: beauty to be saved, the creation of a safe nest in which beauty can be protected…” With these suggestions, the long journey of “Piccola è la Bellezza” begins.

Saul Daniele Ardillo was born in 1988 in Carbonara (Bari), Italy, where he began his studies at the age of thirteen. In 2002, he won first prize in the “Bari Danza” contest and the following year he received a scholarship to Balletto di Toscana in Florence under the direction of Cristina Bozzolini. In 2004, he began his professional training in the Junior Balletto di Toscana, a company for young dancers, where he has appeared in works by F. Monteverde, E. Scigliano, A. Colandrea, A. Benedetti, M.Astolfi.
He joined Aterballetto in September 2007, creating expressly for it: “Esclusa in casa mia” in 2010 and “sussURLANDOmi” in 2011 which won him the Siae Award at the Spoleto Festival; he wrote “Attendere prego” in 2012, “Games” in 2014, “B O R N” in 2015, “Impersonal Deep” in 2016, and “Adam” in 2017. In 2018, he wrote a chorography entitled “Notturni” for Ina Lesnakowski in the In/Finito dance and photography project.

Philippe Kratz is born in Leverkusen (Germany) in 1985, after his first experiences on stage for the “Bühnenkunst” dance theater project (directed by Suheyla Ferwer), in 2002 Philippe began his classical and contemporary dance studies at École supérieure de danse du Québec, Montréal under the artistic direction of Didier Chirpaz. Continuing his studies at Staatliche Ballettschule Berlin, under Gregor Seyffert with teachers such as Harry Müller, Udo Kersten and Tamar Ben-Ami, where he obtained a high school degree and a degree as a professional dancer. He performed in choreographies by Robert North, Marguerite Donlon.
From 2006 to 2008, Philippe danced as soloist in the Dortmund Ballet under the direction of Xin Pen Wang, performing creations by Xin Pen Wang, George Balanchine, and Mauro Bigonzetti.
In August 2008, he joined Aterballetto. For the company he created ”Lettres d’amour” (2012), “SPRING” (2013), “SENTieri” (2014) “L’eco dell’acqua” (2015) and the duet “#hybrid” (2016). In 2017 he created Phoenix, and in 2018 Purple Usurper for Arianna Kob for the “In/Finito” dance and photography project.
In 2016, Philippe was invited to restage an excerpt from “SENTieri” for the Nureyev Gala by Manuel Legris, Director of the Vienna Opera Ballet. Philippe Kratz is ‘Member of the stARTacademy of the Bayer Arts & Culture’.

Fondazione Nazionale della Danza was founded in 2003. The two members of the Foundation are the Emilia-Romagna Region and the Municipality of Reggio Emilia.
Fondazione Nazionale della Danza develops its producing and touring activity under the name Aterballetto, the leading contemporary dance company in Italy and the first permanent ballet-producing organization apart from Opera House companies.
Founded in 1977 as Compagnia di Balletto dei Teatri dell’Emilia Romagna and directed by Vittorio Biagi, the company has been known as Aterballetto and under the direction of Amedeo Amodio since 1979. Composed of soloist dancers capable of performing in every dance style, Aterballetto has gained wide recognition in Italy and on the international scene thanks to the high quality of its performers and artistic directors: Amedeo Amodio (1979-1997), Mauro Bigonzetti (1997-2007, principal choreographer until 2012), and Cristina Bozzolini (2008-2017). (manca nella parte in italiano)
Many acclaimed Italian and international choreographers have worked with the company, including Mauro Bigonzetti, Michele Di Stefano, Andonis Foniadakis, William Forsythe, Johan Inger, Jiří Kylián, Cristiana Morganti, Jiří Pokorny, Cristina Rizzo, Hofesh Shechter, and Giuseppe Spota.
Fondazione Nazionale della Danza received recognition as Production Dance Centre in 2015, in this way enabling artist residencies, hospitalities, and performances by Italian and international companies. The significant dance projects its offers at regional and national level make it unique in Italy. The Foundation organizes events, dance seasons, and a variety of projects that promote wider public interest and awareness of the world of dance. Thanks to Gigi Cristoforetti, director since September 2017, Fondazione Nazionale della Danza – Aterballetto’s new course is driven by a renewal of its guiding principles: to produce performances in different artistic and choreographic universes, to target different audiences, and to tailor production to all kinds of theatre spaces. While maintaining and developing its widely recognized standing, it aims to turn its attention to both national and international panoramas and to broaden the scope of Italian dance beyond its current boundaries.
Establishing dialogue with the visual arts, music, theatre and education, Fondazione Nazionale della Danza initiates partnerships and collaborative projects, playing a key promotion and programming role within them, independently of works of its own repertory. The Italian Ministry of Cultural Heritage and Activities and the Italian Ministry of Foreign Affairs through the Italian Institutes of Culture and the Italian Embassies support Fondazione Nazionale della Danza/Aterballetto activities.