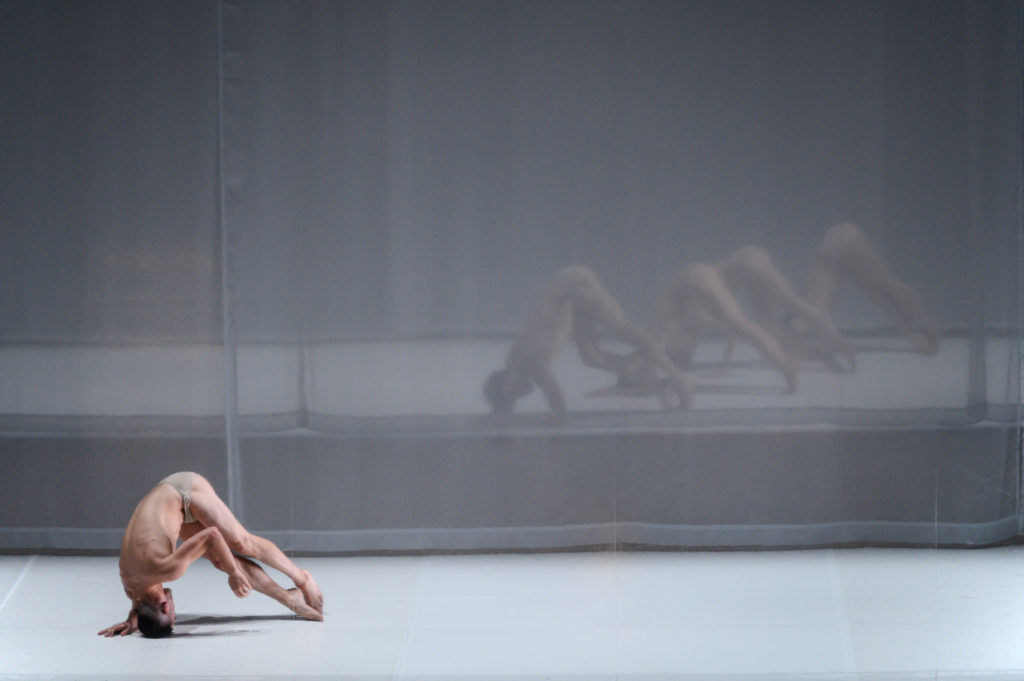 Metamorphosis can be glimpsed in the slightest bend of a marionette hinting at movement, in the preparation for a first step, in the playful reflection of light catching a body by surprise. The dances that make up the show are intended as a meditation on the infiniteness of the gesture. Dances come and go from the background in a continuous pulsation of occurrences, fairy-tale encounters that happen when we set off into the woods. In the clarity of the body, in the qualities of light and shadow, in the nature of things, every dance appears before us as an exercise in listening that hearkens back to the animal spirit and to nature. Figures and presences picked up on the way flow by, a community in movement out of which a tale of the history of man in episodes emerges, revealing his position on the threshold between gravity and of lightness; dances that tell of stumbles and errors, but also of legends that the body holds within it.

So, like a wanderer picking gestures and stories out of thin air, the dancer appears to us in the infiniteness of tactile space, just at the moment when he walks, suspended, comes towards us and passes by us. In that instant, we see man on the threshold of life.

A sequence of pieces composed by Arvo Pärt guides the creation of these apparitions.

Trained in artistic disciplines and architecture, Virgilio Sieni has dedicated himself to experimenting with the languages of the body and dance, exploring modern and classical dance and releasing techniques with Traut Streiff Faggioni, Antonietta Daviso, and Katie Duck. After four years of studying improvisation in Amsterdam, Tokyo and New York, he founded the Parco Butterfly Company in 1983 and the Compagnia Virgilio Sieni in 1992, earning himself a name as a key player on the international scene. Since 2003, he has been the director of Cango Cantieri Goldonetta Firenze and the Centro Nazionale di produzione per la danza, conceived as a center for hosting residencies, shows and transmission/teaching projects rooted in the nature of territories. In 2007, he founded the Accademia sull’arte del gesto, an innovative context for artistic training geared towards professional and ordinary citizens based on the idea of communities of the gesture and sensitivity towards places. From 2013 to 2016, he directed the Dance Sector at the Venice Biennial. In 2013, he was named Chevalier de l’ordres des arts et de lettres by the French Minister of Culture. Virgilio Sieni currently works with preeminent theatrical and musical institutions, art foundations and international museums, simultaneously carrying out projects focused on the geography of cities and territories involving entire communities, on themes of the individual, and on the poetic, political and archeological multitude.

The National Production Center directed by Virgilio Sieni is headquartered in Florence.
The Center’s aim is to develop a context of experiences based on languages of the body and of dance in relationship to the landscape, the regeneration of city spaces and the cognitive sciences. It encourages research and productive contexts based on hosting, training, residencies and the development and creation of new spaces and geographies of the territory, dialogue among the arts, and the creation of “Communities of the gesture”, choosing languages of the body and of dance as mediators that serve functions of education, identity building, socialization and care for the individual person.
The Center is an organic organization encompassing the activities of the Virgilio Sieni Dance Company, the Academy of the Art of the Gesture, and the School of gesture and the landscape that works to develop an artistic program for the creation of a cultural Polis that generates dialogues between the past and the presen, between art spaces and a network of places intended for the expression of contemporary languages of the body, operating in three key locations in the territory:
Cango, an ancient building in the center of Florence, the home of the Virgilio Sieni Dance Company, a space of hosting, residencies and training.
PIA Palazzina Indiano Arte, a structure at the center of the Le Cascine Monumental Park in Florence dedicated to developing relationships between man and nature, peripheral zones and the city center.
Galleria Isolotto, established in the suburban area of Isolotto (Florence) with the aim of developing and regenerating the function of the art space in relation to the development of communities of the gesture, weaving a continuous link between practices focusing on languages of the body and the guardianship of the territory on the part of citizens.