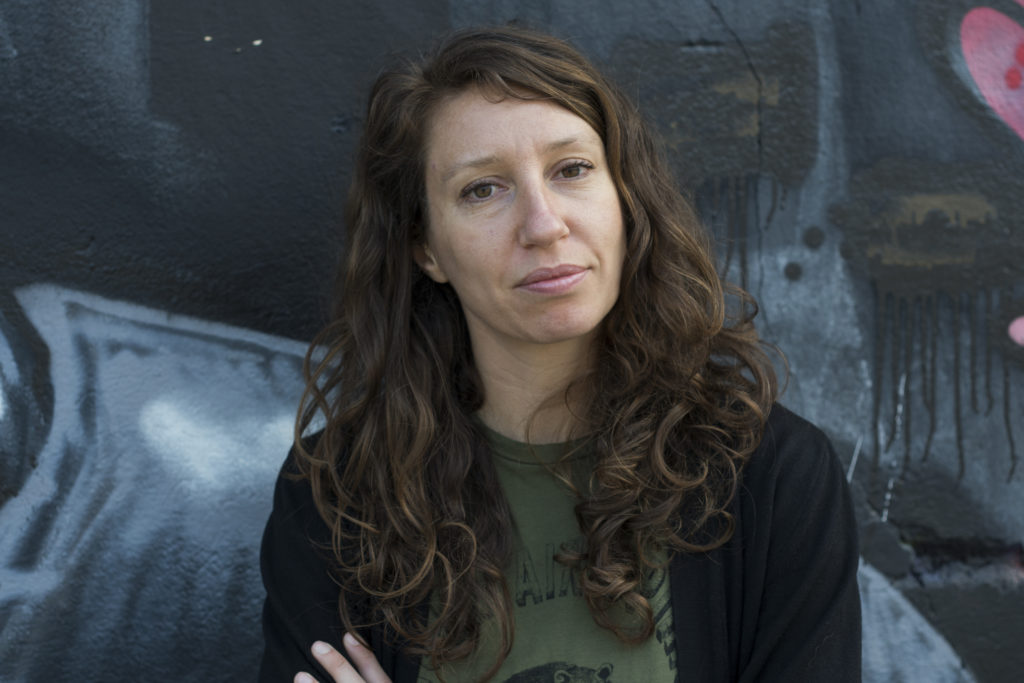 Punk. Kill me please emerged from our fascination with Punk Rock, the revolutionary weapons of its aesthetics, and the political questions it shouted, all of which remain open today. At the heart of the story from which the choreographic exploration begins is the legendary and painful relation (and its tragic conclusion) between Sid Vicious and Nancy Spungen: Britain’s iconic punk rock couple. The performance feeds on readings, listening, visions of the day, and critical studies, such as those of William Tsitsos, David Bloustien, and Lauren Langman, that bring us to a deeper, wider awareness of the historical phenomenon and the desire to explore the “method”, intended as an aesthetic/cultural-political perspective in contemporary key. The performance will stage in the transfigured space of an alcove “furnished” merely with two plaid blankets, a turntable, and rolls of adhesive tape the essence of autonomous Punk technology. At the gig, two women’s bodies are subjected to continuous iconic transformation; self-generating, omnipotent bodies. Sensual, ridiculous, electrified, monstrous bodies sharing the same protest, outrage and passion for one entire (short) life stand as paladins of rebellion and madness, love and equality, and stage a living manifesto of feminism, courage, irony, and freedom.

The project began in 2019 with three artistic residences held at CSC Centro per la Scena Contemporanea inBassano del Grappa, Banca Etica di Padova Arteven/Festival Prospettiva Danza e Teatro, and Santarcangelodei Teatri. Another two residences are currently scheduled at the Kilowatt Festival in Sansepolcro in September and at Centrale Fies in Dro in January 2020. Still to define the technical residences in relation to the debut, supposed in April or May 2020.

Francesca Foscarini is dancer, choreographer and teacher. She received the Danza&Danza 2018 award as Emerging Choreographer and the Positano award as Dancer of the Year on the Contemporary Scene 2015. At the heart of her poetic research, there is the relation between body and intention, the performer specific presence on the scene and his relation with the public. Her works are: Kalsh 2009, Cantando sulle ossa 2011 (Aerowaves 2012, Best solo Masdanza 2012, Avignon Off 2014), Vocazione all'Asimmetria 2016 (Aerowaves 2017), Good Lack 2016 - un trittico di assoli (Back Pack-Biennale di Venezia 2016 - John Tube, Let's Sky), Animale 2018 (Biennale di Venezia 2018), Oro. L'arte di Resistere (2018) commissioned by the Center for Contemporary Scene of Bassano in collaboration with Dance Well dancers (movement research for Parkinson). As performer, he worked with Alessandro Sciarroni (Folk-s) and Yasmeen Godder (Two Playful Pink).

Cosimo Lopalco is a writer, poet, editor and playwright. He is the author of the romance “Tutto a posto tranne me” (Lupo 2012) and of poetry books as “La città che non esiste” (Robin 2019) and “Black Pack” (edizioni del nulla 2019). As playwright, he collaborated with Francesca Foscarini to the conception and creation of “Animale” (Danza&Danza 2018 Award), “Oro”. “Larte di resistere” (Danza&Danza 2018 Award) and “LANDing”, an inter-disciplinary workshop inspired by psycho- geographical principles. He curated the dramaturgy of “Appreciation Society” (2019) by Giuliana Majo and, now, he works with Francesca Foscarini, in order to develop “Punk. Kill me please”, which, in its short form has been selected for Rotterdam International Duet Choreography Competition 2019. Lopalco is founder, with Marcomario Guadagni, of “Edizioni del nulla”.

VAN is a dance production organism supported by the Ministry of Cultural Heritage and Activities and Emilia Romagna Region. It supports, produces and distributes works and projects by eight choreographers: the founders Marco D’Agostin, Francesca Foscarini and Giorgia Ohanesian Nardin with Andrea Costanzo Martini, Camilla Monga, Irene Russolillo, Enrico Ticconi e Ginevra Panzetti, Davide Valrosso. All VAN artists belong to the same generation.They share also the same fit for a language renovation and the creative processes contamination, the positioning in a panorama of international circulation.
A name that insinuates a nomadic approach, VAN was created in 2013 with the objective of creating a structure that protects individuals on their paths by offering concrete support in research, production and education. Today, VAN embraces a vocation for horizontality and attempts to define strategies and shared work ethics within which eight choreographers decided to unite forces, thoughts and methodologies at the end of the second decade of 2000.
To this end, VAN promotes activities that run parallel to individual creative processes and reach out to Italy’s entire dance system: think tank, physical practice archiving projects, and manifestos of ethical sustainability.