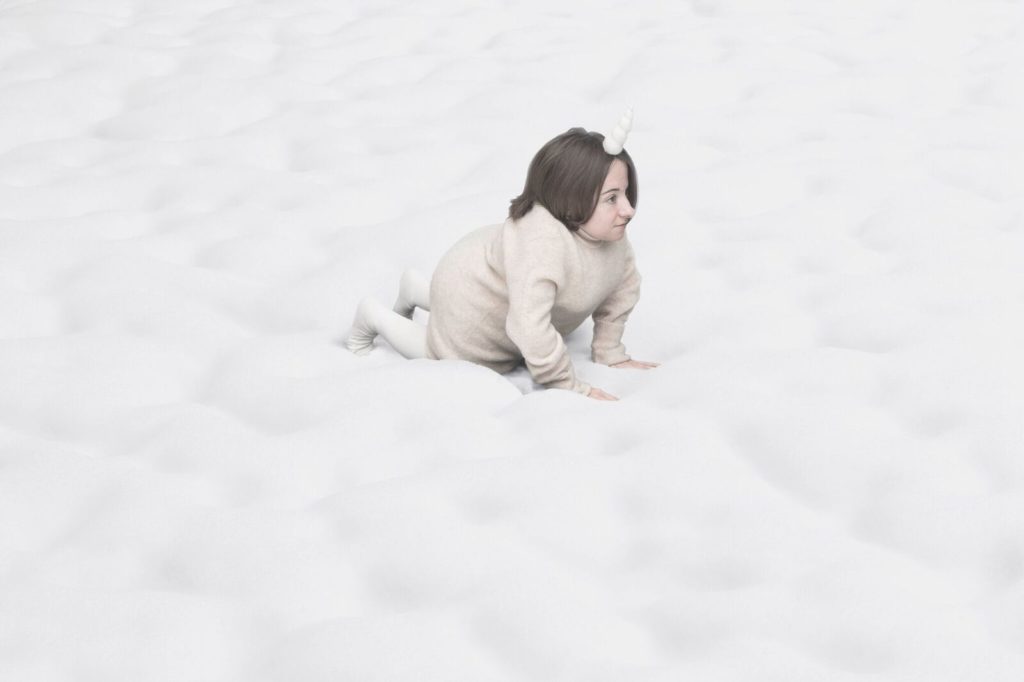 Unicorn origins are unknown. Their roots have been lost by one distracted generation of humans after another. The Unicorn, a creature without homeland or history, has been used and abused by human beings and deprived of its right to speak. Chiara Bersani wants to redress their grievances and give them a love, a story, and a choice through an idea of a political body, a body that responds to its social function at the very moment in which it chooses to immerse itself in society and demands to be seen.

Chiara Bersani (1984), an Italian artist in the fields of visual and performing arts, works mainly in the field of theatrical research and draws from contemporary dance and performing arts. As an actress/performer, she has worked with leading figures on the European contemporary scene, such as Lenz Rifrazioni (IT), Alessandro Sciarroni/Corpoceleste_C.C.00 (IT), La Tristura (E), Rodrigo Garcia (E), Jérôme Bel (FR), Babilonia Teatri (IT), and Marco D'Agostin. Afflicted by a medium-severe form of Imperfect Osteogenesis, Chiara is interested in the body’s political significance, and has started a research project divided into three performative experiments: “Tell Me More”, “Miracle Blade”, and “Goodnight, Peeping Tom”. She is currently working on her first solo to be called “Gentle Unicorn” and holds a scholarship from the School of Higher Education in Screenplay for Cinema directed by Marco Bellocchio. In 2019, she was awarded the prestigious Ubu prize as Best Performer under 35.

Corpoceleste_C.C.00 # was born in 2008 in a vision by Alessandro Sciarroni and Chiara Bersani. After long training and professional development with the Lenz Rifrazioni (Parma) theatrical troupe, the two artists decided to search for an authorial identity of their own. Corpoceleste_C.C.00 # debuted on the international scene with “Your Girl”, the first feature by Sciarroni born from the collaboration between Bersani and performer Matteo Ramponi. Not a company or a collective, but rather a common and independent space, the two artists built up a network of relationships and shared collaborations over the years.
Artistic creation is experienced as a collective process within which every subject involved places his or her expertise at disposal in order to substantiate the visions of the authors. Bersani and Sciarroni became authors in order to support each other's research. Other collaborators pass back and forth between the visions of the two artists to allow materials and reflections to move freely. Corpoceleste_C.C.00 # becomes a crucible in which is possible to experiment new languages and new ways of dialogue and creation among artists, managers, curators, and organizers. The most significant works created within Corpoceleste_C.C.00 # are “Chroma” (2017), “Folk-s” (2012) by Sciarroni, “Goodnight, Peeping Tom” (2016), (2015) and “Gentle Unicorn” (2018).