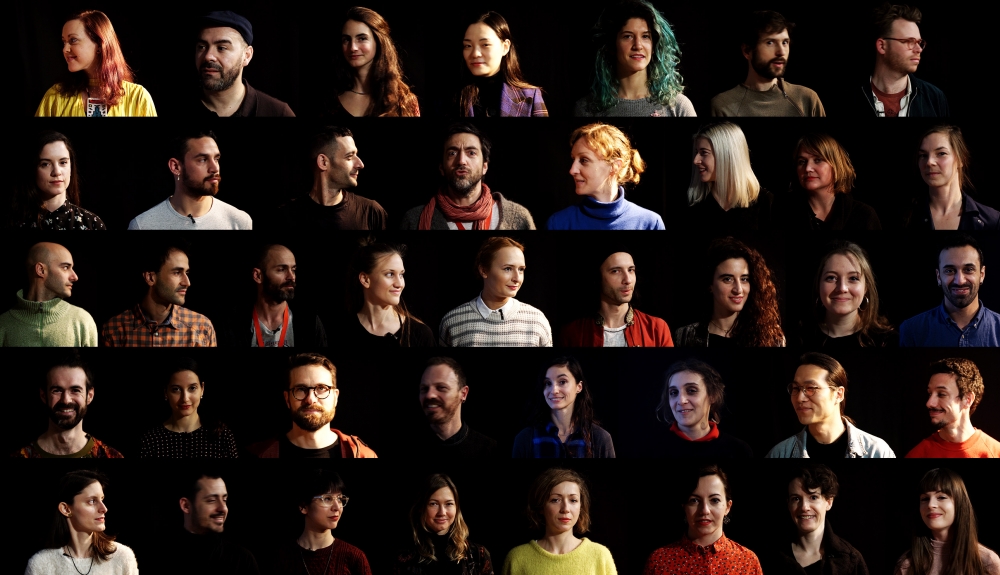 Curated by: Springback Magazine and Aerowaves

Fifteen Springback writers from almost as many European countries will gather for their annual think-tank, Springback Assembly, during this year’s NID in Reggio Emilia. As well as attending performances, learning more about the history of Italian dance and literature and pondering the profound poetics of dance, this unique group of critical thinkers will be grappling with some of the wider issues surrounding the watching and making of movement today. Cultural and social context, political overtones, active audience engagement, freedom of the press…these and other topics that will surely emerge throughout the course of the festival, will be set up for scrutiny during the Assembly.

With the participation of the young authors of Springback Magazine:

Beatrix Joyce | British based in Berlin

Claire Lefèvre | French based in Vienna

Claudia Brufau | Catalan based in Barcelona

Emily May | British based in Berlin

Evgeny Borisenko | Russian based in Berlin

Francesco Guazzo | Italian from Bassano based in Padua

Greta Pieropan | Italian based in Bassano

Irina Glinski | Scottish based in Edinburgh

Lotte Wijers | Dutch based in Amsterdan

Marie Pons | French based in Lille

Roisin O’Brien | Scottish based in Glasgow

British born, brought up in London, Oonagh Duckworth has spent her adult life living in Paris and Brussels where she is still based. She has been a freelance dancer, cultural journalist and producer/programmer since the eighties. As a producer she has worked with many independent dance companies and, as a programmer, with established institutions such as The Pompidou Centre in Paris and The Place Theatre in London. She currently manages different arts projects from her own organisation, The Tinderbox, including the precursor of collective dance initiatives, the Bal Moderne. She is also co-curator of a twice-yearly festival of art in public space, ‘RECOmmerce’ and a regular moderator for debates and aftertalks in the Brigitines theatre in Brussels. As a journalist, she has contributed to The Guardian, Elle Magazine, The Evening Standard, City Limits and Time Out as well as the Belgian English language publications The Bulletin and Flanders Today. She is also director of the Springback Academy.

Sanjoy Roy has written on dance for the UK’s Guardian newspaper since 2002, and contributed to many other publications including the New York Times, New Statesman, Dance Gazette and Dancing Times, and he is London correspondent for Dance International magazine. He was formerly production editor and book designer for Dance Books Ltd, where he also co-edited Dance Now magazine. He wrote the Guardian’s popular Step by step guides to dance, and conceived and scripted the much-loved animation series Planet Dance: a visitor’s guide to contemporary dance. He has been a jury member for choreography awards Premio Equilibrio (Italy), Place Prize (UK) and PECDA (India). This year he has been hosting the Surface Tension podcast for Shobana Jeyasingh Dance, marking the company’s 30th anniversary. He has been a writing mentor at Springback Academy since 2014 and is editor of Springback Magazine, founded in 2018 to cover new and independent dance in Europe. He keeps an online archive of published writing at sanjoyroy.net

Dance producer/programmer and poet, Karthika Naïr is the author of several books, including “The Honey Hunter”, illustrated by Joëlle Jolivet and published in English, French, German and Bangla. “Until the Lions: Echoes from the Mahabharata”, her reimagining of the Mahabharata in multiple voices, won the 2015 Tata Literature Live! Award for fiction. It was shortlisted for the 2016 Atta Galatta Prize for Fiction (India) and highly commended in the 2016 Forward Prizes (UK) . In October 2016, actress Françoise Gillard did a dramatized reading of French translations of the book at the Comédie-Française as part of the “Grenier des poètes” series, and choreographer Akram Khan adapted its Amba/Shikhandi chapter into a dance show, also called Until the Lions. Another adaptation, this time for opera, will premiere at the Opéra national du Rhin in March 2020.

Also a dance enabler, Naïr’s closest associations have been with Sidi Larbi Cherkaoui and Damien Jalet as executive producer of shows like Babel(words), Puz/zle – both winners of the prestigious Olivier Award – and Jalet’s Les Médusées, a site-responsive series of performative evenings at the Louvre Museum, and as co-founder of Cherkaoui’s company Eastman. She was the principal scriptwriter of the multiple-award-winning DESH (2011), Akram Khan’s solo, and its adaptation for young adult audiences, Chotto Desh (2015).