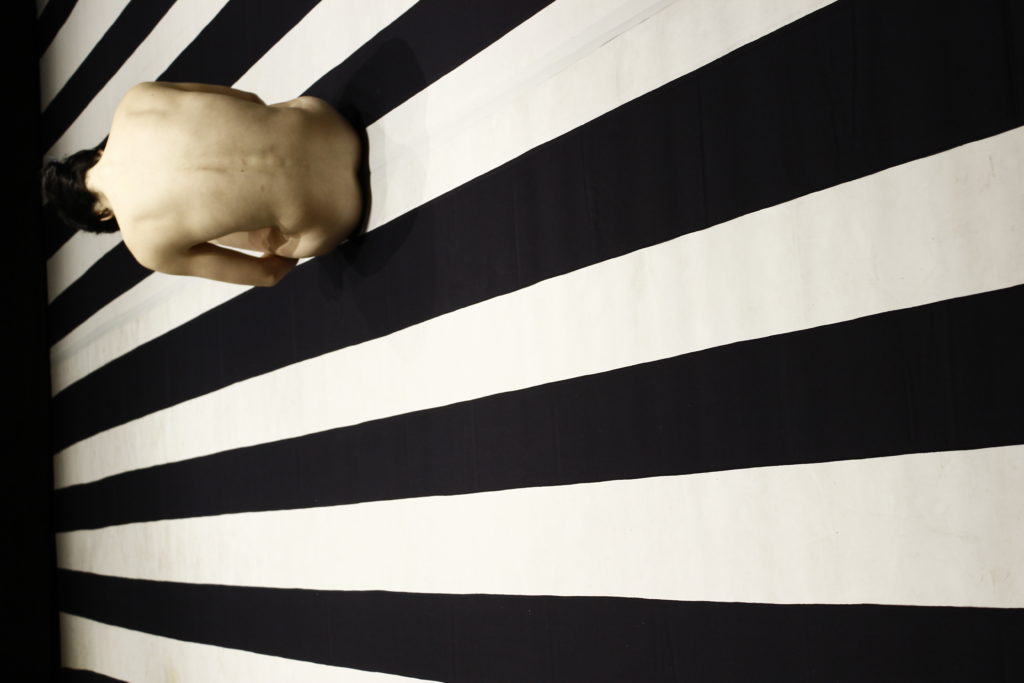 Un/dressis a metaphorical performance in which the fusion of body with fabric gives life to a moving painting that explores the changes and migrations of cloth. While preserving our natural way dressing and undressing, the piece becomes an inquiry into the role of the female’s clothing and body in modern society. The body both strongly present and strangely absent at the same time, is the central point of unification, the hourglass of time that amplifies horizons indicating a crossover. The presence of Prussian blue fabric strips brings precision, regularity, direction and dimension, and establishes behaviour in the achievement of a purpose at the same time.

Masako Matsushita (1986) is an Italian-Japanese choreographer and dancer who graduated in Dance Theater at the Trinity Laban Conservatoire of Music & Dance in London in 2012, receiving the Simone Michelle Award for choreography. She has presented several works at festivals such as the Kilowatt Festival, The Erotic Cloth UK, Sånafest NOR, Drodesera 35th Motherlode, and the 16th Rome Quadriennial. In 2014, she was selected to participate in the choreographic project Prove d'Autore XL presenting “Hedra” coordinated by Cantieri/Rete Anticorpi XL with the participation of partners Amat, Arteven, Electa and Tpp in collaboration with Balletto di Toscana. In 2018, she created the choreography “L.I.N.E.A.” for the National Academy of Dance in Rome as part of the Resid'AND project. The work “LAND SKAP” was created in collaboration with I. Isaksen as a Sånafest Festival production with support from the DE.MO./Movin'Up Project II 2016 session and the Ministry of Cultural Heritage and Activities and the GAi.

Gruppo Nanou was founded in Ravenna in 2004 as a meeting place for the different languages and sensibilities that lie at the heart of the artistic research of Marco Valerio Amico (choreographer, dancer and actor), Rhuena Bracci (choreographer and dancer with artistic gymnastics background), and Roberto Rettura (musician with cinematic sound experience). In this context, the body, sound and image find a common language in choreography, giving birth to an organic work. Its productions have been staged in such important venues as: Fabbrica Europa (Italy), Santarcangelo Festival of the Arts (Italy); Teatro Comunale of Ferrara (Italy); Drodesera (Italy); Les Brigittines (Belgium); Unidram (Germany); and Nu Dance Fest (Slovensko). In 2017, the company began working with Daniele Torcellini, Professor of Chromatology at the academies of Verona and Genova and co-curator of the Ravenna Mosaic Biennial. Thanks to his studies on the perception of color and disorientation that can be enabled by the use of Rgb Led lights, in such way stimulating further work in the field of visual arts and contemporary visual research.