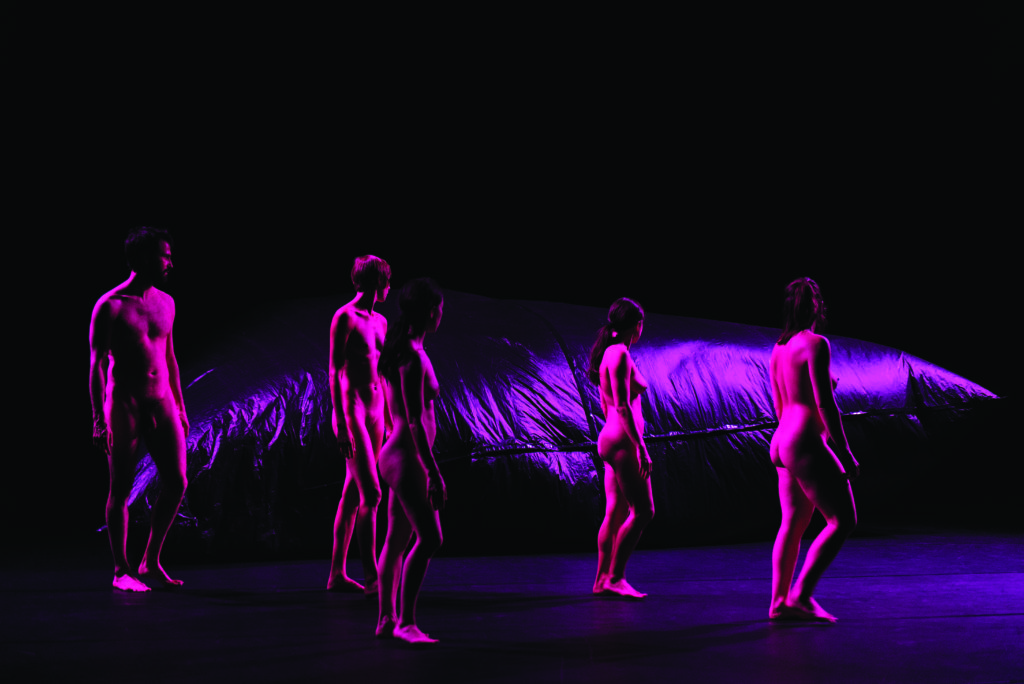 WRECK – List of extinct species is an interdisciplinary performance mixing movement, sound and visual art. A huge black plastic soft sculpture inflated with air moves through the space like a hunter. This abstract object has a very evocative power. Swallowing and spitting human beings. It could be an allegory of Leviathans or legendary undersea monsters, a metaphor of Capitalism or the human condition. It has the power to amplify the viewer’s imagination, multiplying associations and conceptual layers. Our aim is to approach choreographic questions through a different field of art and produce a new and original language: how to create movement with unanimated matter and how to petrify animated bodies. By inverting the relationship between a choir and its landscape, it is possible to write a score for a soft sculpture and, through its manipulation, allow geometric forms to appear, conducting a completely new investigation of the presence of performers on stage. Because it is an “elastic performance”, it can be shown in different versions: outdoors or indoors, on big, small, or standard stages, in museums, markets, stations, forests, schools. In a long or short versions, and with or without local persons (dancers, beginners, children, local communities, etc.) after a short workshop. The standard formula team is with six dancers from the company.

Pietro Marullo (Napoli, 1985). His interdisciplinary approach lies at the intersection of visual and performing art, installation and new technologies, and is deeply focused on social, historical and anthropological topics. His works have been staged on four continents, at important dance festivals, performing arts festivals, theaters, music networks, puppet-object festivals, and contemporary art platforms, such as the OrienteOccidente Festival, the Seoul International Dance Festival, and the José Limon Dance Festival. He is also part of the AEROWAVES 2018 Artists selection. Since 2015, Pietro has been developing the aesthetics of the links between reality and symbolic languages. This approach involves him in creating an « imaginary world of the species», a philosophical reflection with which to face the histories of societies and their common global issues from the larger point of view of the species.