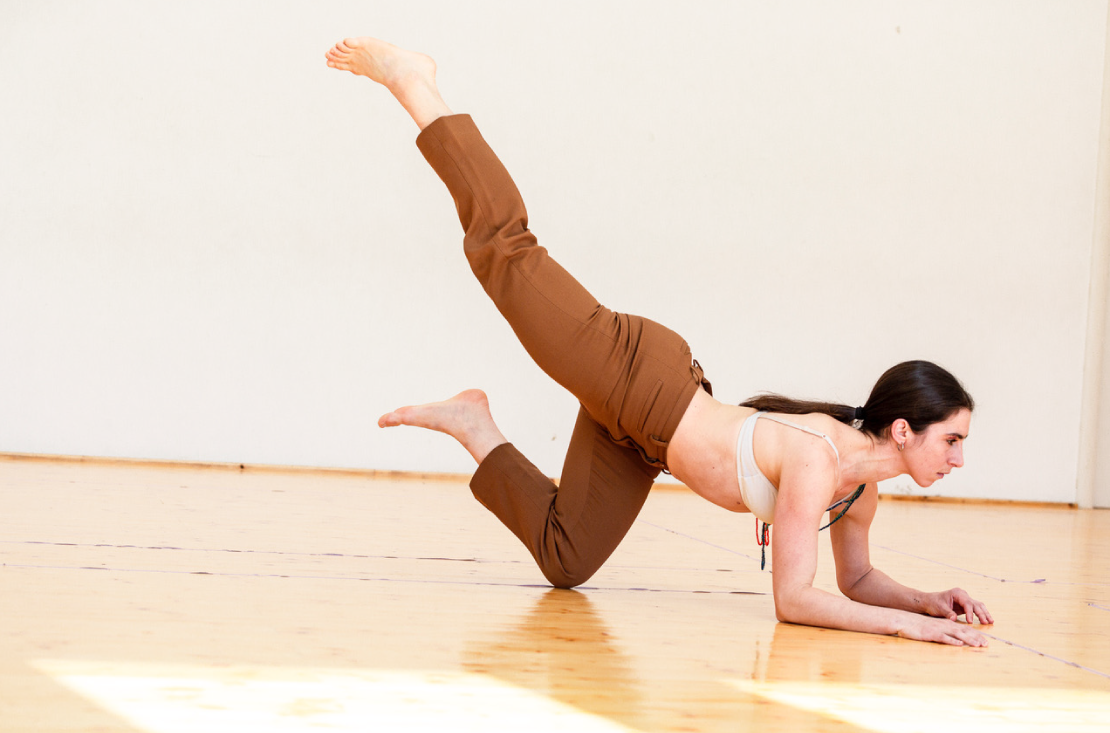 Our research comes from the idea of building a place somewhere else. A place for the body, a landscape that is the body.
The performative action and the body fleshly language are poured in places constantly changing, rhythmically and chromatically disconnected. From present degrees to cold places, from humid undergrowth to crowds of sweaty bodies. The choreographic construction includes a codified structure in which, thanks to the poietic path of both the performer and the audience, and the support of sound and bright landscape, the gates of the unconscious are open and create private narration.
The body is in a present place in which it is studiesd and perceived in an animal way by exploiting the sensitive apparatus. The present here turns into a landscape of natural imagination first, a spatial panorama then, and finally a scenario of the hyperspace. The structure is repeated almost as if the body swoop down into another space every time, just like in a new level of a videogame. The performer keeps on going forward till progressing in the creation of other imaginaries, necessary to open new perceptive levels and to start the imaginary travel we do.

with the support of Armunia/Festival InEquilibrio, Atelier delle Arti, Cango

Alessandro Certini and Charlotte Zerbey have been directed their own artistic and technical research in Northern Europe since 1979, and in 1989 they found the contemporary dance company Company Blu in Italy The artistic carreer of the company goes from the production of performances to choregraphic research, from improvisation to teaching. Company Blu has been in the artistic residence at Teatro Limonaia in Sesto Fiorentino for years and since 2013 it has been the leader of the TRAM (Teatro di Residenza Artistica Multipla) project, supported by the Tuscany Region and by the Municipality of Sesto Fiorentino and other Institution. The company has presented their works to important festivals and theatres like: Rotterdam Festival, Dance Umbrella Londra, Uthrect Festival, Purcell Room Queen Elizabeth Hall Londra, International Tanz Festival Freiburg, Teatro Nacional de Caracas, Biennale Danza di Venezia, Piccolo Teatro di Milano, Teatro Comunale di Ferrara, Reggio Emilia Teatri, Festival A/D Werf di Utrecht, New York Improvisation Fest., L’Animal a l’Esquegna Girona, The Naked Stage Lujbjana, Sic Festival Varsavia, ID Fest. Los Angeles, Radialsystem V Berlino, Milano Oltre. Locally it is found in theatres and shows like: Festival di Castiglioncello, Fabbrica Europa, Cango Firenze, Teatro Studio Scandicci, Teatro Manzoni Pistoia, Teatro Limonaia. Company Blu has also received, among several awards in recognition of its research and artistic work, the choreographic 'Danza&Danza' one and 'Premio IMAIE' with the Shoptalk publication.